With over a decade of grassroots organizing and senior leadership roles on top campaigns, from MoveOn to Democracy for America to the Congressional Progressive Caucus’ foundation, Annie has become a national leader in voter targeting, electorate expansion, campaign strategy, strategic planning and organizational coaching for candidates and movement organizations.

Will also choreograph your flashmob/danceoff. 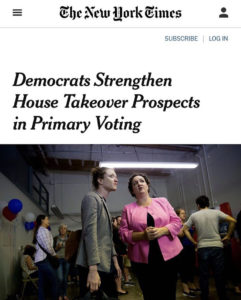 (image description: in NYTimes, Annie strategizing with DFA-endorsed progressive Rep. Katie Porter on her primary night victory in California, who went on to successfully unseat the Republican incumbent in one of the most contested fights of 2018.)

Annie got her start fighting water privatization with Food and Water Watch, in Lexington, KY. She went on to join MoveOn as Lead National Field Campaigner and Deputy House Recruitment Director, where she supported training, candidate recruitment, and organizing efforts alongside MoveOn’s 8 million members – taking on the Tea Party, fighting for affordable healthcare, and challenging rightwing attacks on organized labor from Wisconsin to Ohio to Michigan, from Minnesota to North Dakota.

In 2014, Annie became the Electoral Director of Democracy for America, the 1.2 million member people-powered PAC. In this role, she grew the organization’s endorsements program sixfold, directed over $12 million towards progressive candidates and campaigns up and down the ballot in the 2018 cycle alone, launched the “Transforming Cities” Initiative to invest in critical yet underresourced municipal races nationwide, led a collaborative overhaul of the endorsement process to better center a race equity lens, and built a virtual training program that trained over 25,000 grassroots members in the last presidential cycle. Under her leadership, DFA’s election team powered over 3.5 million calls to key districts in 2018 alone, helped flip Governors mansions and legislative chambers from Wisconsin to Michigan to Virginia, took on tough primary fights and won big in the races that would eventually determine the emerging rockstars of the Democratic Party – as earliest day-one endorsers of gamechanging gubernatorial candidates like Andrew Gillum and Stacey Abrams in Florida and Georgia, to the “Squad” at the federal level, Congressmembers Alexandria Ocasio-Cortez, Ayanna Pressley, Rashida Tlaib, Ilhan Omar and more.

Looking to build right now especially with those who know that elections are just one piece of the puzzle in creating the world we seek; who see electoral organizing as an essential way to build a more reflective democracy, grounded in racial and economic justice; who love and respect voters; and who are invested in challenging and uprooting white supremacy in ourselves, our institutions, and our electoral process wherever it shows up.